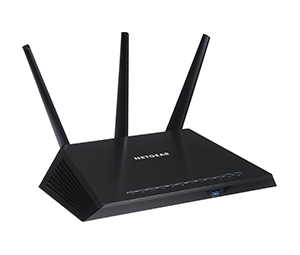 If you have been noticing a lot of buffering when watching a movie or video using wifi usually everyone blames their internet service provider (ISP) which may be the culprit. But chances are you may have an old wifi router and this could be the chief reason it is buffering, so you may need to consider upgrading your wifi router which may increase your internet speed.

There is a difference between a modem router and a wifi router. Your ISP requires a modem router to connect to the internet. However, if you want wifi a different router is required. There are routers that combine the two into one box, one for connecting to your ISP and the other for wifi. The alternative is two separate router boxes, a modem router and a wifi router. Time has an article, 5 Reasons to Replace Your Router Right Away, if your current router is a few years old.

So let’s learn a few basics about your wifi that you should know before you replace your wifi router. First off lets determine your speed.

We posted an article about how to determine your speed so you can find out what your device is downloading in megabits per second. The easiest way is to go to fast.com and it will quickly do this for you on any of your devices. Netflix recommends the following:

So what is your speed?  It would be a good idea to compare your internet speed with all your devices you use to see if there is any difference. So now we have a base upon which to learn the basics of wifi knowledge. Also, when you try various speed test services on the internet you will get different results depending on where the testing server is located (your ISP can give your most reliable speed test – see ISP below).

If you have an Apple Airport wifi router, you will eventually need to upgrade because Apple recently has abandoned its wifi router division and will eventually no longer support Airport unless you keep renewing your Apple Care. So don’t worry about purchasing $199 Apple AirPort Extreme with dual band 802.11ac which will last you a long time with Apple Care support before you need to upgrade your router in the future. Apple Insider has an article recommending which wifi router to replace your older existing Apple Airport wifi router using 801.11g or 801.11n standard.

To know whether your ethernet speed is faster than your wifi speed you simply go to a speed test service like fast.com, speedtest.net, speedof.me, speedtest.xfinity.com, speakeasy.net, or contact your ISP provider for a test (scroll down to ISP below). First test using your wifi.  Now turn off your wifi and connect your device using ethernet and perform the same test. Note the difference. Remember that you will get different results from speed test providers depending on where the server is located that performs the speed test. By understanding the difference between ethernet and wifi speeds you will know first off whether there is much difference at all but particularly the wifi threshold. In some cases, it may not be that much difference depending on your setup.

Initially developed as a way to replace your ethernet cable — the cord that used to connect computers to the web, wifi is usually the way everyone now connects their device to the internet (Wi-Fi currently carries more than 60% of the world’s Internet traffic). However, it is important to know that connecting that old ethernet cable from your router to your device is usually the fastest way to connect to the internet! So if you have a way to connect your device via ethernet that probably is your true and best internet speed test. When you connect through wifi you lose some speed. Ethernet can produce speeds anywhere from 100 Mbps to 1000 Mbps and beyond. Wifi works with standards that your wifi router uses, so if you have an older router using 802.11g standard which can only offer up to 54 Mbps, even if your ISP gives you 100 Mbps you are throttled to about half of what you are paying for using your old router. However, if you have a router using 802.11ac standard, not to worry, since it handles speeds up to 3200 Mbps (and practical speeds of around half that). However, all your devices need to support the 802.11ac standard, so not only do you have to upgrade your router but also your devices. As of this date, most devices support up to the 802.11n standard which supports speeds up to 600 Mbps. What standard does your wifi router support? More info on standards. Now you understand why upgrading to a wifi router that can handle the speed you are paying your ISP (as well as upgrading all your devices) may increase your speed.

While these two terms are generally used interchangeably, because they often mean the same thing, actually there is a difference.

Bandwidth refers to “the bit-rate of available or consumed information capacity expressed typically in metric multiples of bits per second. Variously, bandwidth may be characterized as network bandwidth, data bandwidth, or digital bandwidth.” Wikipedia Bandwidth is what your ISP is referring to when selling you your package, the capacity or the size of the “Internet pipe” that is allocated to each user and includes measurement of the amount of data that can be transferred in a given time measured in bits per second. Your ISP clearly sells you a bandwidth and sets the maximum amount allocated to your user account or a total capacity measurement.

Speed is generally used by consumers to refer to how fast they can download files and upload files measured in bits per second and includes the rate at which a specific amount of data is transferred. Speed is actually what you get in real time, not what you could get. Various factors, i.e., your wifi theoretical speed, effect actual data transfer rates or speed.

In conclusion bandwidth is a fixed amount while speed can vary.

There are a number of reasons why the theoretical threshold speed (wifi standard threshold along with bandwidth) is different from actual speed. Your router should be placed in the optimum position in your home. Speedguide.net has an article about this and the main factors are:
distance – distance from the access point, as well as any physical obstructions, such as walls or floors, signal-blocking or reflecting materials affect signal propagation and reduce speed (moving around in your home effects the speed and you may even encounter blackspots)
interference – other wireless networks and devices in the same frequency in the same area affect performance (microwaves and cordless phones, as well as nearby routers using the same channel, even the atmosphere can cause problems)
shared bandwidth – available bandwidth is shared between all users on the same wireless network.
wireless security – encryption and security systems slow the speed
bandwidth throttling (see ISP below)
2.4 gigahertz or 5 gigahertz frequencies – depending on your situation using one or the other may slow or increase your speed – SpeedGuide has an article explaining which is best for your situation
channel – detecting the best channel to use in either of the above two Ghz frequencies using the least used channel – TechRadar has an excellent article on finding the best channel
latency (see Latency below)
protocol – TCP connection is slower than UDC

Basically your wifi speed is about 60% of what the actual speed (connected via ethernet) is on your network. Depending on your results, it may or may not make any difference. For example, lets say your ISP says it will give you speed up to 50 Mbps. You test your wifi speed and you are getting 30 Mbps. You now test your ethernet speed and you get 45 Mbps. You can easily live with your wifi speed since it is enough to prevent buffering of your movies so it may not be too much of a difference to matter. However, if you get 15 Kbps (that’s one tenth of a megabit!) with your wifi test and then 10 Mbps with ethernet, you may want to contact your ISP and complain you are paying for speed up to 50 Mbps and only receiving only 10 Mbps. And it is possible you need to upgrade your wifi router!  If your wifi results are receiving less than 50% of what ethernet gives you, you probably should upgrade your wifi router.

When you do a speed test the ‘ping’ is the amount of time it takes a packet to travel from source to destination. Together, latency and bandwidth define the speed and capacity of a network and is normally expressed in milliseconds.

You need to know what speed your Internet Service Provider is providing for you. Usually the package you purchase will indicate the speed up to a certain threshold. The higher the threshold the faster the speed. However, it all depends on whether your ISP can actually give you that higher threshold. If, for example, you are in a building or area that your ISP is providing service for a large number of clients, the speed can drop during peak hours of service to you since everyone is demanding data at the same time, and the ISP can only provide a certain volume of data to be distributed to everyone in your building or area. This is called bandwidth throttling. If you are noticing buffering during peak times of use you can complain to your ISP but usually the solution offered is to upgrade your package to a higher threshold which costs more money or the other solution is to use your internet during off peak times. So if you call your ISP tech support they have a way to check your internet speed which is quite reliable because the server testing your location is close and reliable. This is important to know so that you understand the results and compare this with what you are actually paying for with your ISP. You may be surprised that what you are actually receiving is not even close to your threshold.